About 4 weeks ago thanks to Spark AR’s new release it has now made target tracking AR, sometimes known as image tracking, fully possible on the Instagram platform. What this now means is that we can trigger AR effects when the camera is pointed at an image that we set as the trigger, e.g. a logo, film poster or even product packaging. In this article we will look at some of the first AR effect filters to take advantage of this new functionality as well as discuss some different tips as to how you can use target tracking in your next promotional AR effect.

So, What’s The Big Deal With Target Tracking?

The whole point of augmented reality is to mix what is real with the different things that we have created and inserted into the real world. The target tracking helps to blend the AR effects together with different objects and imagery. This target tracking has been available in Snapchat lens studio for quite a while, so it was only a matter of time before it was released for Instagram AR. It is a very useful trigger to have when looking to create more convincing AR experiences. It allows for AR effects to be created that can interact and play with art and other iconic imagery. It also gives brands the ability to design and create digital campaigns that can interact with existing or newly created promotional materials. AR camera effects can be used to bring some life back into or draw some additional attention to a static hero shot or even printed packaging. AR effects can interact directly with the packaging or else occupy the surrounding space.

This Instagram effect created by Pablo Tajer uses target tracking and is designed to enhance Matisse’s piece hanging in the Tate Modern London. If you want to try it out yourself, you’ll need to google the painting yourself to trigger the effect. This is definitely one of the more impressive uses of target tracking and a famous art piece. 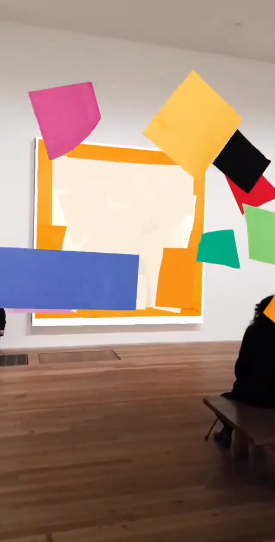 When it comes to utilising target tracking to create immersive experiences for your users there are a few things that you need to keep in mind:

Use A Good Quality Image As A Tracker

Unfortunately, not all images were created equally, and just as there are some images that make for great trackers, there are also images that simply just will not work as effectively as others. You could probably do a quick Google, I’m sure someone has created a guide for this. Try Best Practices for Target Tracking Spark AR or something like that. Ultimately there are two things that you need to remember. Check the rules before agreeing anything with a client and test out the exact same image that the client wants to use before agreeing to take on the project. This will definitely help to mitigate any unfortunate surprises. No one likes them, they take years of your life expectancy.

Use A Product or Product Packaging As An Image Tracker

So, you can nearly use just about anything these days, as long as it has clearly defined edges and has decent contrast. It could be anything from a coke can to a cereal box and even an event invite… the world is your literal oyster. Starbucks Christmas Instagram AR effect was triggered using their new Christmas cups. Every cup design unlocked a different AR effect. Chipicao which is a croissant brand, just released their AR effect which used tokens found on their packaging to trigger special Justice League AR effects. They ran it as part of a promotion where every week a new mask would be released.

There’s nothing worse than sitting there with your camera open wondering whether or not an effect is about to start or not. Make sure to let users know what they have to do or at least what image tracker they are looking for so just make sure that you add in appropriate  or else an outline of the image tracker in the middle of the device’s screen. Tinstructions. Another handy trick that you can use is to position a semi opaque imagehat way the user has a pretty good idea that they are looking for an image tracker to initiate the AR camera effect.

QR Codes. Should You Use Them As An Alternative Or Complementary?

So, the simple answer is that you can use them for both, although it really won’t look that cool at all and honestly younger generations might not even know what they are anymore. You might as well be showing them a floppy disk. I don’t know what happened to QR codes, I personally thought they were useful, but no one ever really seemed to care about them. I blame apple mostly for not building neo reader into their phones. It just made QR codes feel a bit unnatural to any Apple users. But hey Android is definitely leading the pack globally these days anyway and I doubt that’s going to change anytime soon. As it stands you can use QR codes to send people to the Facebook or Instagram link for your AR camera effect. When scanned it opens the link just like it would open any other link. Then you can also use the QR code as the actual tracker image that is triggering the AR effect. Again, it has clear edges, enough detail and enough contrast but again I would probably advise away from it due to just how boring they are. People just really seem to disengage with them. And when you consider that you can just use a poster or packaging as the tracker image, I really just don’t get why you would use a QR code instead. But if you really wanted too, you could.

This new target tracking feature is working pretty well on the Instagram platform, so you have no reason not to give it a go. The simplest application would be to do something quirky with a business card or else just go all in with your product packaging. It is definitely capable of creating fun and immersive AR experiences for your users and take something ordinary and makes it extraordinary. Get in touch today and we can help you come up with the perfect AR concept for your brand.